It’s been a few months since I provided an update and for good reason. I’m not sure exactly why but I ran into a problem with translating the game. It seems as if when reaching the last few floors of the game the map becomes corrupted and renders the game practically unplayable.

I have a few theories on why this has happened but i’m not entirely sure. In this post I have included my most current version and the change log here: Case of Dungeon. I have been the only one who has tested this translation so feel free to download it and give it a playthrough and let me know if you run into the same bug. In the meantime I will continue to ask around and see if I can’t fix it. I should also mention that all testing had been done on NP2 pc-98 emulator.

I had wanted to write up a short guide for this game but work has kept me from putting a lot of time into this lately. If there is any questions about the game or its mechanics leave a comment below and I will respond as quickly as possible.

A smaller update this time but I wanted to share a few more pics. Also there is no guide for this game at all that I could find so in the next post I will be doing a small guide on tips and game-play. Not to the extent you would find on GameFaqs but hopefully it will help someone who may be interested in this game. Even with an English translation the game-play is unconventional and direction is vague so I feel its needed. I believe with a small guide the game is easily playable in its native Japanese language.

On to the pics. First a few monsters.

Just a side note, I haven’t uploaded any pics of boss monsters. Also for those who may be able to read Japanese you might notice that the Red Element untranslated pic reads “Buru Eremento” in romanji which is Blue Element. This must be a typo because there are actually 2 “Buru Eremento” in the game, one blue and one red. Therefor I took it upon myself to fix this in the English translation and name it Red Element.

Now for some misc pics.

As you can see in the misc pics, I’ve translated the floor level your on when viewing the map. When an attack misses I changed the text to display “Attack has missed” and removed the Kanji that reads “no equipment” to display “Unequipped” when your character does not have anything equipped.

Next time a guide, until then! 🙂 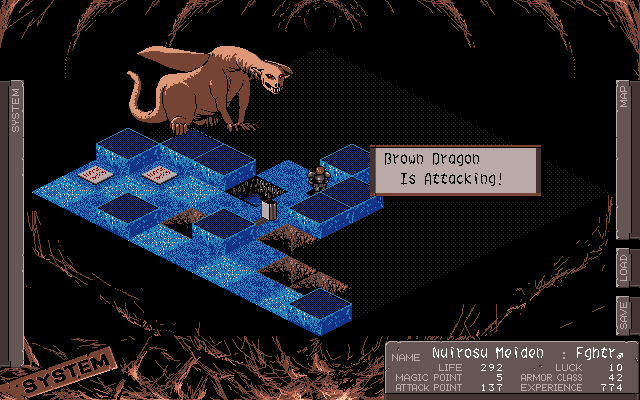 This is a much larger update than the last one. Weapons, and armor are complete and monster names are at around 95% complete. There are still about 5-6 names that need to be translated yet. Also some addition text has been completed as well. For the pics I will start with the monsters however I won’t be displaying all of them because there are quite a lot. Here are a select few!

Here are a few more random pics of misc text that has been translated.

I didn’t take screen-shots of all the weapons, armor, and items that I have translated. But they are all completed. After finishing the last few monster names I will be moving on to the rest of the misc text and lastly tackling the 4-6 paragraphs of text pertaining to game story.  Also if anyone is interested in play-testing my current version of this project let me know. 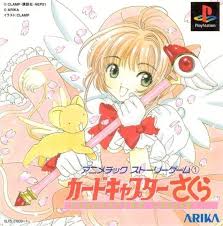 For fans of the Cardcaptor Sakura series the news of a English translation of Arika’s 1999 Playstation game “Animetic Story Game 1: Cardcaptor Sakura” should be well received. Its basically an adventure/puzzle game that follows the anime’s first season.  A link to the English patch can be found in my YouTube play-through video’s description. 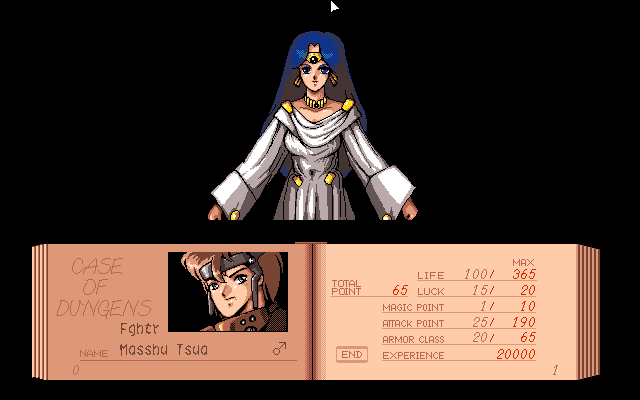 As promised here are some pictures of the translation project. First the title menu!

Next is character names and classes. I will mention that the class “Knight” had to be abbreviated to “Knght” and “Cleric” to “Clrc” as there was not enough space for the full spelling. I have ran into one problem so far and that is normally you can click a characters name to change it, however now the game soft-locks if you attempt to change a default name. I’m hoping it is because there are still a few locations where I have not yet translated the names as I’ve only completed the character creation screen.

Next I will be working on the weapons and armor. As I previously mentioned restorative items are complete and I will post some pics of them next time.

I was hoping to have some screen shots to accompany this post however Neko Project 2 PC-98 emulator only exports screen shots to Bitmap (.bmp) format and WordPress will not accept them. I will convert them png files and upload them this week to show the progress.

However it has been a productive weekend! For the most part this is an easy translation since there is very little dialogue and the bulk of the text that needs translated is words such as items, equipment, monsters, etc. At the time of this update I have translated all restorative items, all characters names, class titles, and title menu. That leaves a few paragraphs of dialogue, enemy names, weapon and armor names, and a few miscellaneous character menu words.

I’ve yet to finish my play-through of this game but that should be finished by the end of the week so if you wish to view it, it can be found here.